The Importance of November 2011 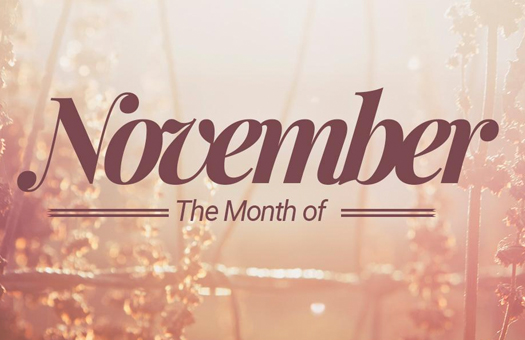 I have been asked to write some more about November 11th, 2011. I guess the little that I wrote last week created some interest so here we go.

There seems to be a lot of interest and talk about two dates, the first one being December 21st 2012 and the second November 11, 2011, and both of them have significant importance in both the New Age circles as well as the more scientific astronomy field.

Many people are talking about the significance of November 11th 2011, as if it was more important that the predicted date by the Mayas and confirmed by astronomers of December 21st 2012, to get the full understanding of 2012 I wrote a long article called “2012 as the end of a cosmic cycle” it is a bit long but well documented about the importance of that date. If you have not had a chance to read it click here. I think you will find it very interesting and enlightening.

Now as far as 11:11 for many of us this has been a significant number for many years. How many of you have seen for years now 11:11 on your digital clocks? I am sure many of you have as well as other sequential numbers such as the 7:11 and 10:10

November 11, 2011 or 11: 11: 11 is an interesting date for many new age or spiritual people, many of us have questioned these numbers without really understanding why they flash in our lives so much. The book of Revelations talks about the 11:11; the Two Witnesses are raised from the dead. The question is who are these two witnesses? To me the two witnesses are the parts of the self, the duality that is within us that must be raised, the balance of the male female parts of each and every one of us that must be recognized and acknowledge. If one is dead this is the time to redirect it, to resurrect it, once is alive within us then we can balance it out with consciousness and Self love.

Nothing significant appears to have happened two thousand years ago during the year 11.

In other words, nothing significant at a planetary level has taken place during the 11:11

Some good things have happened in previous 11:11s, World War I ended on 11-11-1918. So this could be a sign that after 93 years we could be entering into a time of peace on earth. However as mention on my article 2012 as the end of a cosmic cycle, what is the most important thing is if we learn the language of the heart, that is the language of love and once is activated and we let it flow from the heart it will emanate through our emotional body and human emotions have the ability to impact the electromagnetic fields of the earth, and that is what is all about.

We are creating this whole thing, the human condition, our mind is in complete control and if we put our minds and hearts together we can make the 11:11 incredibly significant for ourselves and the planet.

If you have been a part of the 11:11 phenomena and the 11:11 has been flashing all over for you then you must wake up to personal responsibility. The 11:11 has been and It is a wakeup call that has been taking place all over the world it is the way in which the angelic realm has been communicating with us to say “hey you” pay attention, the world needs you for you to become conscious and balanced, for you to be a peacekeeper a love-keeper and make a difference in the world.

The 11:11 and the 12:21, 2012 are instigating fear all over the world, talk of destruction, chaos, the end of the world. People are buying underground shelters, all induced by fear. Sales of these shelters went up 1000 % in the US after the earthquake in Japan. So look at the way the world is reacting, look at the way you are reacting, are you plugging in or connecting to the news, to the wave of fear or are you slowly breathing and telling yourself that you are making a difference in the world?

11:11 is about balance, if we add 1+1+1+1 = 4 and for is the number of balance. Balance the four aspects of the self, the mental, emotional, physical and spiritual. Balance the four aspects of life and how they relate to you in life, the fire, water, earth and air elements, put them all together and you end up with an 8. And 8 is the number that we are going towards.

When we add 11 + 11+ 2011 = 8, eight is the number of the infinity symbol, this represents the upper and lower chakras and the center of the figure 8 is the heart. This is important In the way it relates to earth cycles, especially when we put it in the context of the Cosmic Clock, this clock measures the cycles of time that the earth as well as us humans go through and when the minute hand of the clock reaches the last 5 minutes of the hour, a cycle is coming to an end and a new one to begin.

November 11, 2011 is just that, the earth is entering into the last year of a cycle of 26,000 years so the earth is purging, letting go, of all accumulated energy, karma of the previous cycle. The energies are shifting from the Himalayas to the Andes, from the east to the west, from the masculine to the feminine. So we all have an opportunity as citizens of the earth to embrace this energy and consciously participate in balancing the earth Karma that is upon us.
I hope you see that the 11:11 is the doorway the entry into a much bigger and important cycle, the cycle of completion as the earth enters that one last year, that one last minute of the 26,000 race. Imagine a marathon runner and she has been running for 25,999 years and now she is about to enter the last mile, the last year. That runner is tired, hungry and thirsty, never the less she mustards all the energy she can the adrenalin starts pumping and she sprints to the finishing line.

All of this does not mean that there must be one religion or one faith, or one governing body or for all citizens of the earth to have a single vision. All it means that we can collectively honor and respect one another, we can show tolerance and have honest communication and with these we are moving into a future of freedom and peace.

So here we go onward towards 2012, and it relates to us in both a spiritual way and an astronomical way, on exactly December 21st, 2012 there is a certain special astronomical conjunction that is so rare that it doesn’t repeat for a long period of time, and that is another 26,000 years. Talk about an exciting time to be alive, to be a witness.

Enter the silence daily, meditate and pray think about the 11:11, the 12:21:12 and think even more on the 12:22:12 as the beginning of a new cycle of opportunity for peace and non violence, of love, kindness, tolerance, compassion and more than anything gratitude for the opportunity to be alive at this special time on the earth.